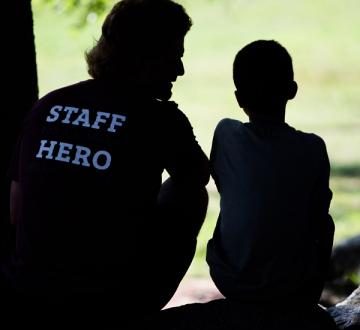 This summer you will join, figuratively, with more than 320,000 staff working at some 2,400 accredited camps serving more than 7.4 million children nationwide (ACA, 2013). And, suffice it to say, this is the opportunity of a lifetime.

Why? Because you will greatly influence young lives. And, in my opinion, there’s no greater gift than that.

Despite having developed orientation training materials for more than four decades, I still find it difficult to pinpoint exactly which messages and activities will prepare you to be the best you — to unleash the power that you have to positively affect the young people who will be in your care. For me, my work was always guided by the exhortation of an orientation guest speaker to “help kids feel lovable and capable.”

In reality, achieving those outcomes takes a lot of hard work and numerous inputs that result in other important constructs related to the summer camp experience. According to the American Camp Association (ACA), those include the following (Browne & Warner, 2019):

Other outcomes studied during the 2018 season by the Center for Adolescent Research and Education (CARE) in collaboration with Coastal Carolina University center around leadership traits, such as independence, innovation, perceived competence, responsibility, social entrepreneurship, and teamwork (Wallace & Mischel, 2019).

Though camp and workforce development may seem incongruous to you, a convincing — and growing — body of work suggests that they are not. As ACA President and Chief Executive Officer Tom Rosenberg pointed out in a November/December 2018 Camping Magazine column, “Imagine a fun college summer working at camp, where, as with any other internship, young adults gain knowledge, skills, and hands-on experience while making important connections for their future.”

He continued, “On a daily basis . . . staff members practice 21st-century skills that will be more valuable than ever in the new age.” He cited the World Economic Forum as highlighting the “top ten skills needed to thrive in 2020 and beyond,” which are collaborative problem-solving, critical thinking, creativity, people management, coordinating with others, emotional intelligence, judgment and decision-making, service orientation, negotiation, and cognitive flexibility.

Rosenberg went on to say, “Camp staff members are immersed in these skills and learn to teach them to their campers. In doing so, the . . . community becomes a self-motivated culture of learning and leadership . . . in which they not only seek to fulfill their own potential, but also choose to do it in a way that promotes positive change individually and globally. They learn to focus purposefully on why they do what they do . . . [and] adopt healthy habits and make meaningful contributions to the world and the future” (Rosenberg, 2018). A win-win if ever there was one.

But is that too melodramatic? Maybe not.

A January 2019 article in The New Yorker noted, “Your life choices aren’t just about what you want to do; they’re about who you want to be,” and quoted Steven Johnson, author of How We Got to Now, who explained that life’s most important choices “can’t be understood on a single scale.” The piece continued, “Suppose you’re offered two jobs: one at Partners in Health, which brings medical care to the world’s neediest people, and the other at Goldman Sachs. You must consider which option would be most appealing today, later this year, and decades from now; which would be preferable emotionally, financially, and morally; and which is better for you, your family, and society” (Rothman, 2019).

The Power of Alignment

As potent as a summer camp job can be in preparing for career and life, it’s also possible — arguably certain — that the workforce, in turn, can inform your role this summer.

In fact, the pioneering work of George Labovitz, PhD, a former Boston University business professor, founder of Organizational Dynamics, Inc., and co-author of the book The Power of Alignment, provides a guide. I recently had an opportunity to sit down with him to talk about alignment and engagement. Here is what I learned.

Step One: The Main Thing

What does that mean exactly? As a camp counselor it is critical that by the end of staff training you feel aligned with the mission, philosophy, and values of the organization for which you are working, and that you are ready to engage with all members of the community. While this may represent a shift in focus from yourself, your education, and your immediate family and friends, it nevertheless presents as an important prerogative for positive camper outcomes. It may very well also be highly correlated with your own job satisfaction and overall summer experience.

While each camp may differ in its articulation of the main thing, it’s safe to say that key ingredients likely relate to health, safety, fun, and learning.

Labovitz highlights the example of the US Department of Food and Agriculture, where the main thing was to “end hunger in this country.” Clear, precise, motivational.

So, what is your camp’s main thing? If you don’t know, it’s a good question to ask.

Competence refers to having a clearly defined strategy and being able to deploy it effectively and quickly. Of course, to do so, you have to know what it is.

Camps that can articulate a transparent, compelling strategy are more likely than those that don’t to achieve their goals. While strategies may change over time and across circumstances, Labovitz says that typically if only 10 percent of the workforce knows what the strategy is, the organization is likely to be “misaligned.” Over time, just like a misaligned car, that organization may become hard to steer and unresponsive to change. Here he cites as an analog FedEx’s strategy of people, service, profit, with profit being the “dependent variable” (the value of which depends on that of another).

The translation? Employee engagement is key to alignment.

The third and final step, unlike the main thing or the strategy, is reliant on the staff. In other words, strategies are executed at the bottom, not the top. This is called vertical alignment.

Vertical alignment is incredibly important in the military and in industries such as healthcare and commercial aviation, precisely because the price of misalignment is so high. The same could be said about the camp industry. As second-year counselor Adam Rosen, a student member of the national advisory board at CARE, told me, “When you’re charged with protecting parents’ most cherished asset, their child, a huge amount of trust is given from those parents to you.”

In a last word, Labovitz points out that, while three decades of empirical research reveals that aligned organizations outperform their competitors by every major financial measure, alignment may be hard to achieve. Pointing to tenets of social psychology, he says that human beings are not naturally collaborative but rather are more likely to look at others with suspicion.

As a case in point, he shared the story of a University of Michigan experiment that took place in an Ann Arbor, Michigan, ballroom where volunteers were given either a green hat or a red hat. Over time, people migrated to one side of the room or the other to join those with the same color hat. As Labovitz put it, “The green hat people don’t like what the red hat people are planning.”

The Power of Engagement

Another critical concept relevant to your success as a camp counselor is how engaged you are with your campers and fellow staff. Of course, one can be engaged but not in the best way. That’s where the positive role-modeling piece comes into play (or as I like to say, always do the right thing, even when no one is watching). Arguably, if all the counselors at your camp are aligned to its mission and willing to collaborate with others, engagement should be easy to come by.

But what about the kids?

Engaging effectively with them requires learning a little bit about them and understanding what expectations their parents have for their camp experience. It’s also helpful to identify what your campers’ expectations are. Then you can more effectively go about the task of building relationships with them.

Camp directors say that parents rated the following as the most important benefits of sending their children away for experiential learning: increasing self-esteem and self-confidence; making new friendships and getting along with others; offering fun activities; and providing a safe place. Other expectations identified among camp parents include communicating information; being a good role model; having fun with their kids; teaching fair play; discouraging foul language; being fair; and encouraging campers to try new things.

The kids’ expectations tend to be more basic, such as having fun, making friends, and feeling good about themselves.

Establishing positive relationships with your campers is, again, key to engagement. And doing so will require you to take some (positive) risks, such as opening yourself up to strangers and sharing parts of yourself.

An important thing to remember is that relationship building begins when the child arrives at camp, so you’ve got to be ready! To wit, Michael Pastore, author of the book Dynamite Counselors Don’t Explode, suggests that the first moment you meet a camper is one of the most important of the summer. That is because the camper will begin to immediately answer some important questions: Do you care about me? Are you on my side? Are we going to work and play together?

In social psychology parlance, this phenomenon speaks to primacy, or what happens first. Think now about what you want those answers to be.

Beginning with the End in Mind

Starting camp with clearly defined goals as to what you want to have accomplished by closing day is a good way to meet your own expectations — ones that can be shaped by true alignment and engagement, unleashing the power of you.